CineSat provides you with the 63 most frequently used map projections. This ensures that you can read in image data from virtually any standard map format and provide to your clients nicely tailored views of your weather products.

CineSat supports projections onto planes, cylinders, and cones. For each projection surface you may choose among three basic projection properties:

Azimuthal projections map the Earth onto either a tangent plane or an intersecting plane (NPOL and SPOL).
The projection planes are in special pose for the NPOL, SPOL, and GEOSAT projections. For all other azimuthal maps you can select the projection plane by specifying the tangent point's longitude and latitude.

CineSat provides you with the following azimuthal map projections:

New York and Vienna centered orthographic projections, and a stereographic view of New York (rightmost) - all built from an infra-red composite of 5 satellites:

Polar-stereographic projection of the European region;
IR cloud image together with a land/sea background, geographical net and the major European cities drawn as overlay: 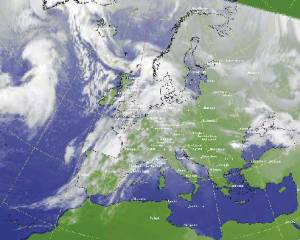 The GEOSAT projection is the standard map used for earth disk images from geostationary meteorological satellites. GEOSAT uses an ellipsoidal model of the earth. The projection plane has its tangent point in the sub-satellite point on the equator. The satellite is the projection center.

With VPERSPECT, the projection center can be in any point above the earth surface (not only above the equator). The Vertical Near-Sided Perspective projection (VPERSPECT) uses a spherical earth model.
The following images show a perspective view of the North pole and of Vienna from a distance of 36.000 km:

Hammer - a pseudo-azimuthal projection of the world

HAMMER is a modified azimuthal equal-area projection that shows a map of the full earth. You can of course choose any center meridian for this projection.

EQUIRECT is the simpliest projection type. It maps the longitude and latitude to a rectangular coordinate system. This projection is frequently used for thematic maps and digital elevation models, since it is very easy to geo-reference.
The standard parallel defines the intersecting cylinder. The following subtypes of the EQUIRECT projection have a fixed standard parallel:

ISOCYL projection with standard parallel at 0°

Mercator's conformal cylindrical projection and the Miller projection are both very popular for world maps. The MILLER projection has been derived from MERCATOR to reduce the exaggeration of polar areas (see example maps below). Both projection types support an ellipsoidal earth model. 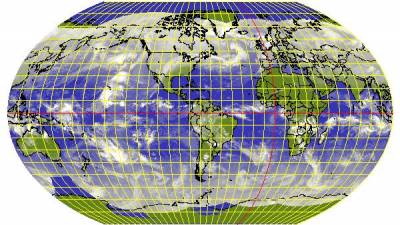 Conical projections map the earth either onto a tangent cone or an intersecting cone. The cone's top is located over the North or the South pole. The projection cones can therefore be defined by 1 or 2 intersecting (standard) parallels. Conrical projections are typically used for areas with a large East-West extent.

The most important conical maps used in meteorology are the ISLE (equi-distant), ALBERS (equal area), and LAMBERT (conformal) projections. All three projections use an ellipsoidal earth model.

The ISLE projection is an equi-distant conical projection developed by J.N. De l'Isle

The ALBERS projection is an equal area conical projection developed by H.C. Albers

In addition to the above described 'Great Three', CineSat provides the following 7 conical projections which use a spherical earth model:

CineSat also supports a special projection developed by Van der Grinten (VANDGRINTEN) which maps the full globe into a circle. Some cartographic literature classifies this projection as polyconic.

An example VANDGRINTEN world cloud map could look like the image below. You can of course choose any center meridian for this projection: 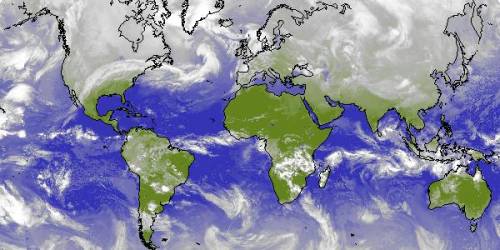 Every projection has a rich set of parameters that can easily be configured to adapt to your image data. A full projection definition consists of

All map parameters are stored in projection files with user-defined names. You can then use a projection file name with the PROJECT command to project your images or to generate a map.

Before mapping Earth coordinates to a projection surface, the irregular 3-dimensional shape of the Earth - the Geoid - is being approximated by the mathematically more handsome spheroid - i.e. either a sphere or an ellipsoid.

The selection of the best approximating spheroid depends on the mapped region and the required level of cartographic accuracy. CineSat comes with a configuration file that defines the 50 most important standard cartographic spheroids by their names and axes. It also includes the HRIT ellipsoid which had been defined by the Coordination Group for Meteorological Satellites in the HRIT file fomat specifications. Of course, you can use your own sphere or ellipse axes with every CineSat projection.
The ellipsoidal shape of the earth is used by the most important azimuthal, cylindrical, and conical projections. All other projections use the sphere model with a user-defined or a default earth radius.
Standard spheroids significantly increase the interoperability of CineSat with GIS systems and other data sources. They also increase the accuracy of all geographic computations derived from image positions, like point distances and motion vector speeds.

For every image projection, you can either apply the commonly used nearest neighbor and bi-linear interpolation methods, or a meteorologically tailored bi-cubic spline resampling.

The bi-linear interpolation method is a common resampling technique that is faster than bi-cubic splines but slightly blurs image details. Bi-cubic spline results are sharper and will be your first choice for typical meteorological imaging applications.

The nearest neighbor method will not change pixel values and is recommended for artificial image content, like land masks or cloud images with burnt-in overlays. The method is fast, but has a negative impact on small cloud image structures. The example image below shows the typical nearest neighbor steps in the shape of small cloud cells and cloud borders.

On the other hand, the bi-cubic spline method provided by CineSat is very well suited for producing nice-to-view cloud displays, and for pre-processing images that are intended to be fed to automatic image analysis programs. Small scale cloud structures are being preserved also in projected images and will lead to far better results for all subsequent image texture and object analysis.

CineSat's bi-cubic spline resampling algorithm has been especially developed to accurately rectify and project Meteosat images. The method had been validated and operationally used by the European Space Operations Centre.